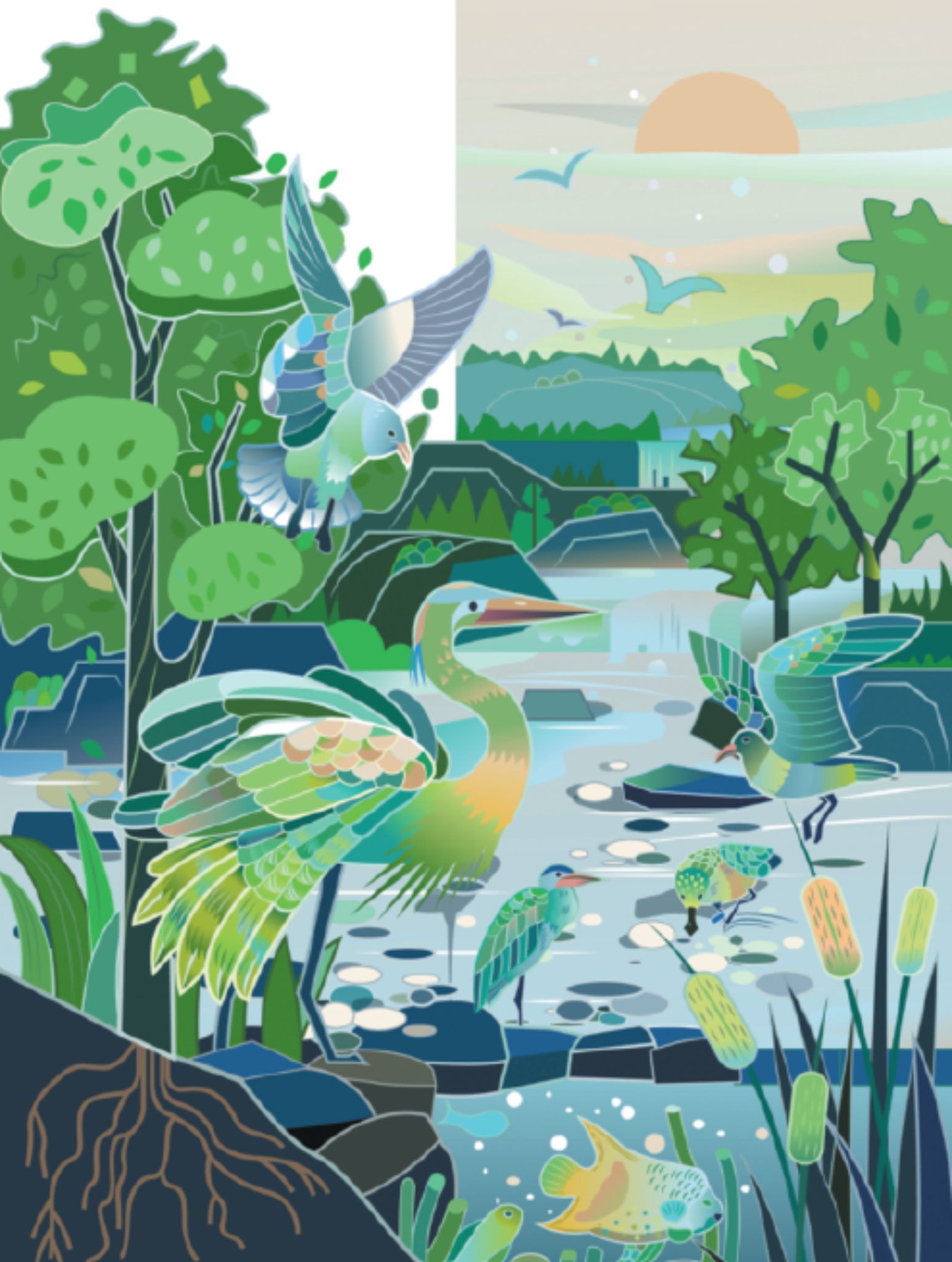 Active preparations are underway across China for the upcoming 14th Meeting of the Conference of the Contracting Parties to the Ramsar Convention on Wetlands (COP 14) from Nov 5 to 13, to be held in Wuhan, capital of Central China's Hubei province. Themed "Wetlands Actions for People and Nature", this year's conference is committed to strengthening national actions and international cooperation for the smart conservation of wetlands.

It is the first time for China to host this international wetland event, and Wuhan is the first "International Wetland City" to host it. This year being the 30th anniversary of China's accession to the Ramsar Convention, China will showcase the great strides it has made in enhancing wetland conservation and restoration over the past decades, contributing to the global endeavor to realize an ecological civilization.

World leaders have been facing the challenge of delivering win-win policies for the economy and ecology, which has been exacerbated by climate change, the COVID-19 pandemic and other extreme events. Undoubtedly, China's endeavors in expanding wetland areas and establishing wetland parks have not only improved water quality and provided critical habitats for migratory birds, but also contributed more than $8 billion to regional economic growth and directly created over 47,000 new jobs.

Wetlands will play an important role in the Chinese path to modernization characterized by harmony between humanity and nature.

Wetlands are natural or artificial water-saturated areas, existing either all year round or seasonally. They are one of the three major ecosystems, the others being forests and oceans. They are widely distributed around the world, and 10 percent of the world's wetlands are in China, spread across 65.9 million hectares.

Although covering only 6 percent of the Earth's surface, wetlands are home to 40 percent of the world's animal and plant species. Consequently, wetlands protection is also vital for biodiversity conservation.

The wetlands' role in pollution control and water purification is significant. One hectare of wetland can absorb over 1,000 kilograms of nitrogen and over 130 kg of phosphorus every year. Referred to as the "kidneys of the Earth", wetlands can be regarded as water-treatment facilities.

Wetlands act like giant sponges or reservoirs, which may absorb and store excess water when flooded. During the dry season, wetlands release stored water, delaying and deferring drought disasters and avoiding water shortages. The wetlands' role in regulating runoff can help prevent inundation and flooding.

They are also premier carbon sinks, locking 300-600 billion metric tons of carbon globally, accounting for 12-24 percent of the total carbon storage in terrestrial ecosystems, which can be considered as a useful tool for achieving carbon neutrality.

In addition, wetlands nurture species that are food sources for human beings, and also drive the development of ecotourism, green agriculture and other industries to boost economic prosperity and rural revitalization, which is an important assurance for the ecological civilization of China.

It needs to be stressed that wetlands are being wiped out due to environmental pollution, overfishing and land reclamation, and other human activities. In 2020, the World Wide Fund reported that nearly 90 percent of the world's wetlands had been degraded since the 1700s, and we are losing wetlands three times faster than forests. More proven measures should be taken to bend the curve on freshwater biodiversity loss.

Since the adoption of the Ramsar Convention on Wetlands in 1971, more countries have been aware of the urgency and importance of wetlands protection. China joined the convention in 1992, stepped up its endeavors to restore wetlands, and has become an important participant, contributor, and torchbearer of the global efforts.

During the 13th Five-Year Plan period (2016-20), the Chinese central government invested 9.87 billion yuan ($1.35 billion) in over 2,000 projects to implement wetland ecological compensation subsidies, turn croplands back to wetlands, and restore wetlands. To date, China has established 64 wetlands of international importance, 29 of national importance, more than 600 wetland nature reserves and 1,600 wetland parks. Under the management system, more than 50 percent of China's wetland areas are under protection. Besides, wetland survey and high-tech monitoring systems have been introduced and China is the first country in the world to have conducted three rounds of nationwide wetland resources investigation, improving timely supervision of wetlands conditions. Most importantly, China came up with its first wetland protection law in June this year, marking a new stage of law-based wetlands protection in China.

Hosting the COP 14 at a time of bird migrations, China will showcase the charm of wetlands and offer a beautiful view of harmonious human-nature coexistence. To build a beautiful China, the country will continue its efforts in establishing 50 new wetlands of national importance by 2025 and raising the rate of national wetlands protection to 55 percent. But policymakers should pay attention to the following issues:

From a holistic perspective, wetland protection should embark on watershed management, because upstream and downstream ecosystems are closely intertwined. In addition, no water, no wetlands. We need to guarantee water quality, water quantity, and water ecology to nurture wetlands. Last but not least, an economic compensation and punishment system for wetland conservation needs to be established to crack the dilemma of wetland protection and construction funds.

To completely tackle the challenges of shrinking wetlands and the degradation of their ecological functions, global cooperation is more vital than ever. We must shift to a path of balanced and sustainable development. Moreover, coinciding with the United Nations climate change conference (COP 27) and one month before the UN biodiversity conference (COP 15), we should seize the opportunity of the COP 14 to demonstrate the importance of Ramsar and wetlands to meet climate goals, and ensure the new Global Biodiversity Framework includes wetlands, thus positioning wetlands as critical elements in national implementation plans.

Every stroke counts. Our headway in wetland conservation is creating a shared future for all.

Chen Bin is the director of the Center for Eco-Environment Governance at Beijing Normal University. Fang Dan is a research fellow at the center.