A new study published in the April issue of the Lancet Planetary Health revealed the relationship between rising temperatures and malaria incidence in the past 30 years in Hainan, China: rising temperatures had opposite effects on malaria dynamics at low and high altitudes; from 1984 to 2010, the peak of malaria incidence in the high-altitude mountains of central Hainan earlier but that at low altitudes later. This study was led by the Center for Global Change and Public Health of BNU and the Hainan Provincial Center for Disease Control and Prevention, and jointly completed by the State Key Laboratory of Remote Sensing Sciences, the Center for Disease Control and Prevention in the Central Theater, the University of Oxford, Harvard Medical School, the University of Chicago, and Universitetet i Oslo. Assistant Researcher Wang Zengmiao, Director Liu Yonghong, Director Li Yapin, and Chief Physician Wang Guangze are the first authors, and Professor Tian Huaiyu and Professor Nils Chr. Stenseth are the corresponding authors.

In the past 20 years, the world has made great progress in fighting malaria. Despite this progress, malaria remains one of the most serious challenges to global health. Africa has the highest incidence of malaria, followed by South-East Asia. The seasonality and spatial distribution of malaria cases are affected by temperature and rainfall. In the Kenyan highlands, increased temperature has been observed to result in malaria transmission. In the Ethiopian highlands, it is observed that reduction in malaria transmission is associated with a slowdown in global warming (temperatures are still rising, but slowing down). The effect of temperature on malaria incidence in the African highlands is controversial due to confounding factors such as antimalarial drug use, population migration, and changes in forest cove. The unique topography, climatic diversity and richness of malaria prevalence data in Hainan, China provide a new mechanism and possibility for explaining the impact of temperature on malaria incidence in highland areas. 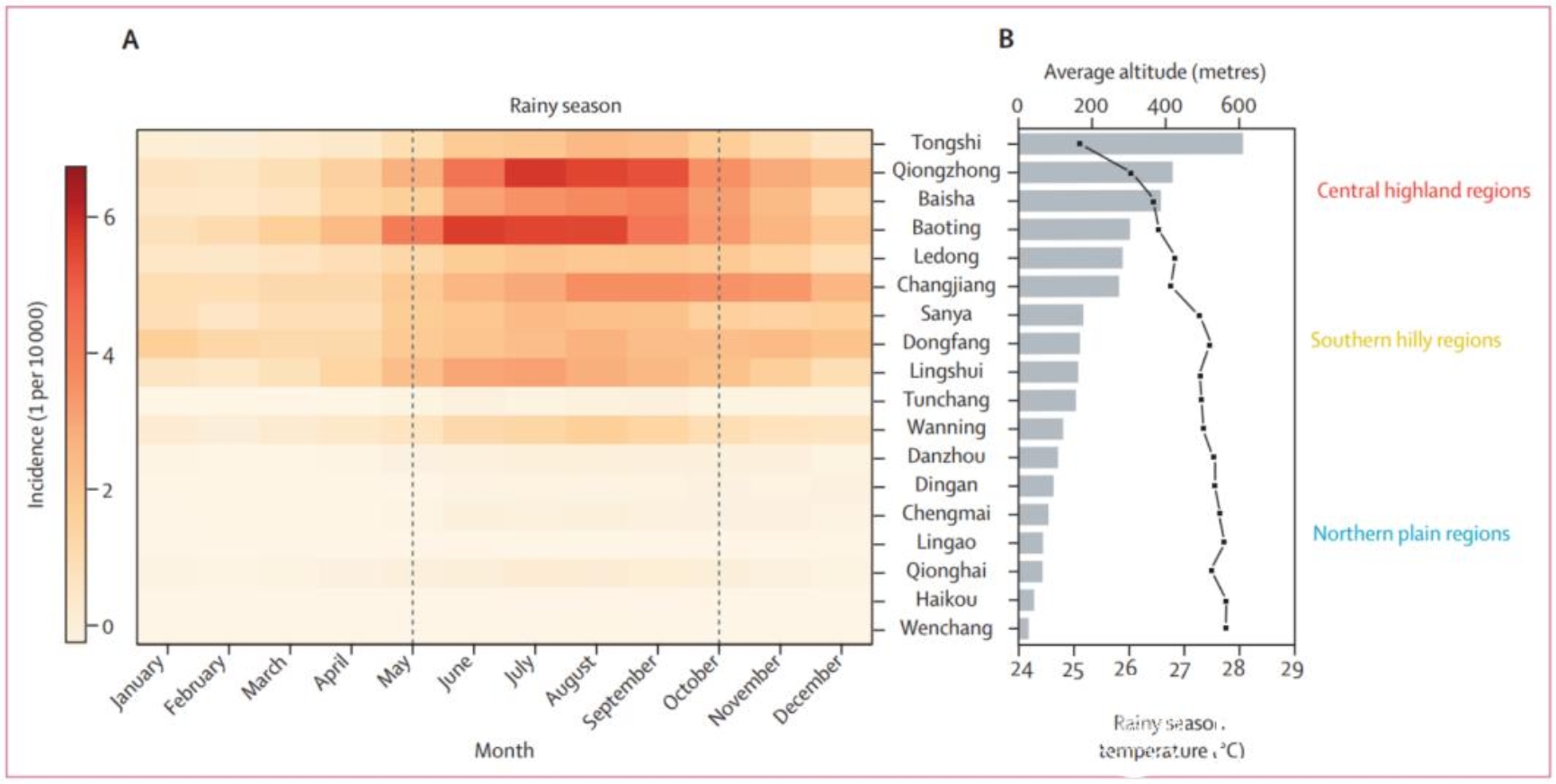 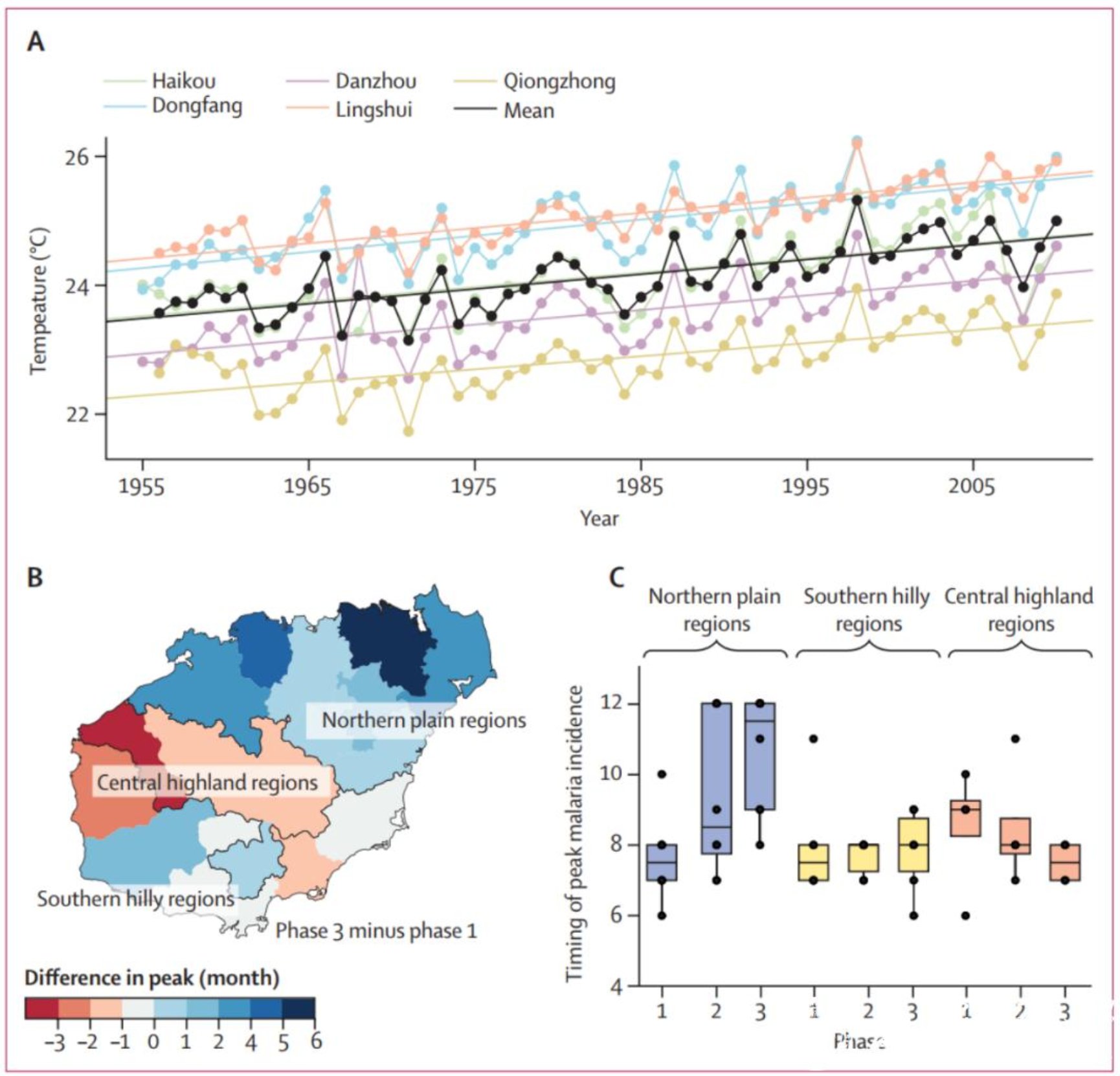 Rising temperature and shift in timing of peak malaria incidence in Hainan, China, from 1984 to 2010

The results of this study suggest that changes in malaria incidence in tropical islands are associated with long-cycle warming and altitude, which means that climate change is already affecting the current risk of malaria transmission. However, the interaction between climatic factors, human activities and mosquito habitats may also have an impact on malaria incidence. In the future, the relationship between the three needs to be explored through further data collection and analysis in order to gain a deeper understanding of the interaction between climate change and malaria epidemiology, thereby optimally facilitating malaria elimination and public health decision-making. In 2021, China was certified by WHO as a malaria-free country. One of the key success factors is the implementation of the "1-3-7" strategy, which will also contribute to malaria control in Africa. This research has been funded by the National Natural Science Foundation of China, the Major Projects of the Ministry of Science and Technology, the State Key Laboratory of Remote Sensing Science, and the Beijing Municipal High-tech Discipline.