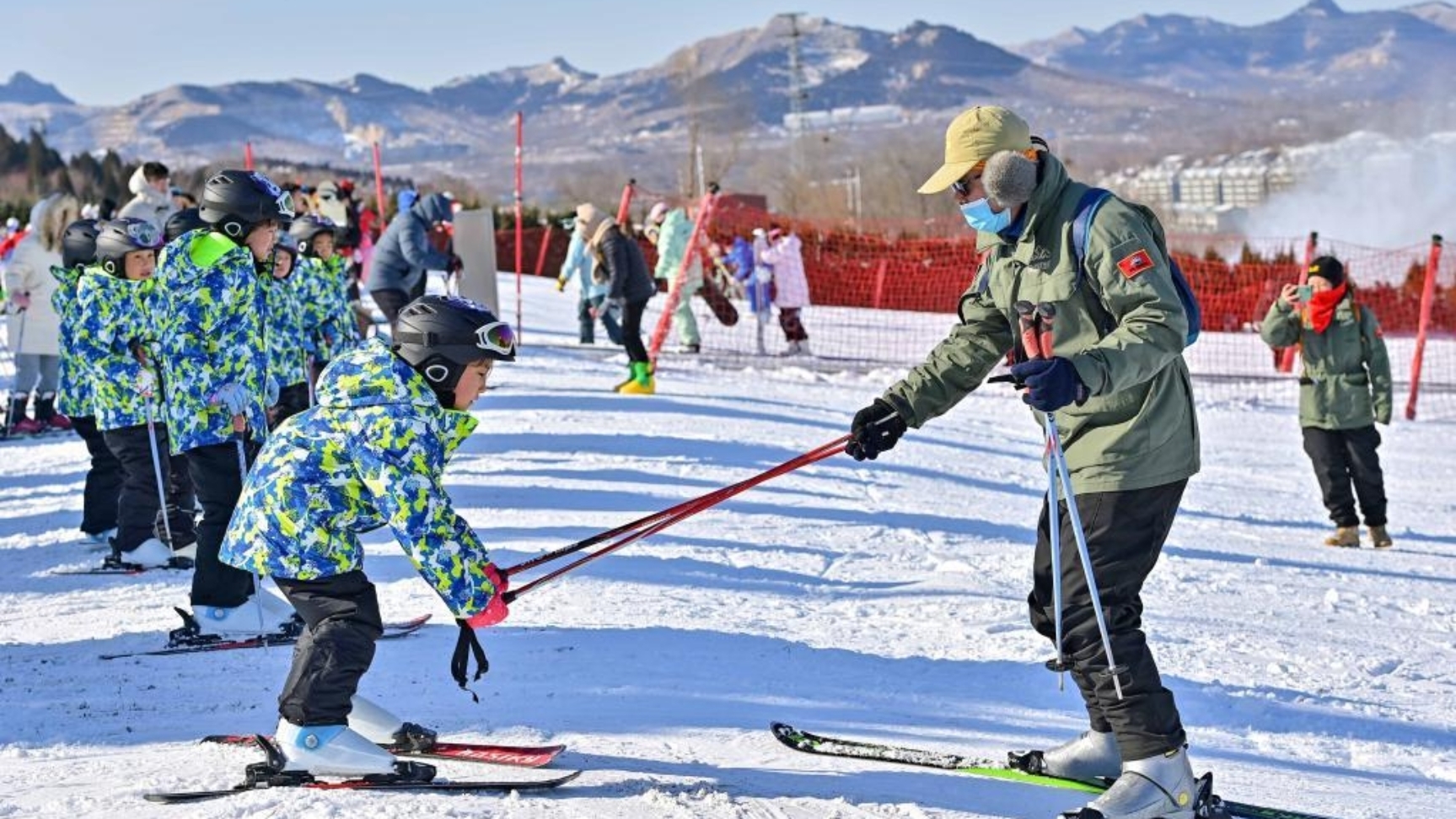 An instructor teaches a child to ski at a ski resort in Qingzhou City, east China's Shandong Province, December 25, 2021. /Xinhua

More recently, winter sports in China were considered an obscure and inaccessible pastime. But thanks to government initiatives, many more people are now choosing skating rinks and ski slopes for recreation and health promotion. Chinese President Xi Jinping, a longtime sports fan, once noted that sports are essential to improving people's health and realizing their hopes for a better life. This explains why he promised to put more than 300 million Chinese on skis and skates.

To make skiing and skating more accessible to the public, the government built hundreds of new facilities even before the 2022 Beijing Winter Olympics. Statistics from China's General Administration of Sports show that as of early 2021, there were 654 standard ice rinks and 803 indoor and outdoor ski resorts in China, up 317 percent and 41 percent respectively from 2015. By the end of 2020, about 2,000 primary and secondary schools across the country had included winter sports in their curricula.

These figures impressed the chairman of the International Olympic Committee, Thomas Bach. He said, "With these 300 million people engaging in winter sports, we can clearly say the history of winter sports will be one before Beijing 2022 and one after the Winter Games in Beijing. So, it's really a landmark event for the global development of winter sports."

Before COVID-19 hit the industry, visits by skiers in China doubled from 10.3 million in 2014 to 20.9 million in 2019. And so far, China ranks eighth in terms of skier visits, with the U.S., Austria and France in the top three. But very soon the situation will change dramatically. 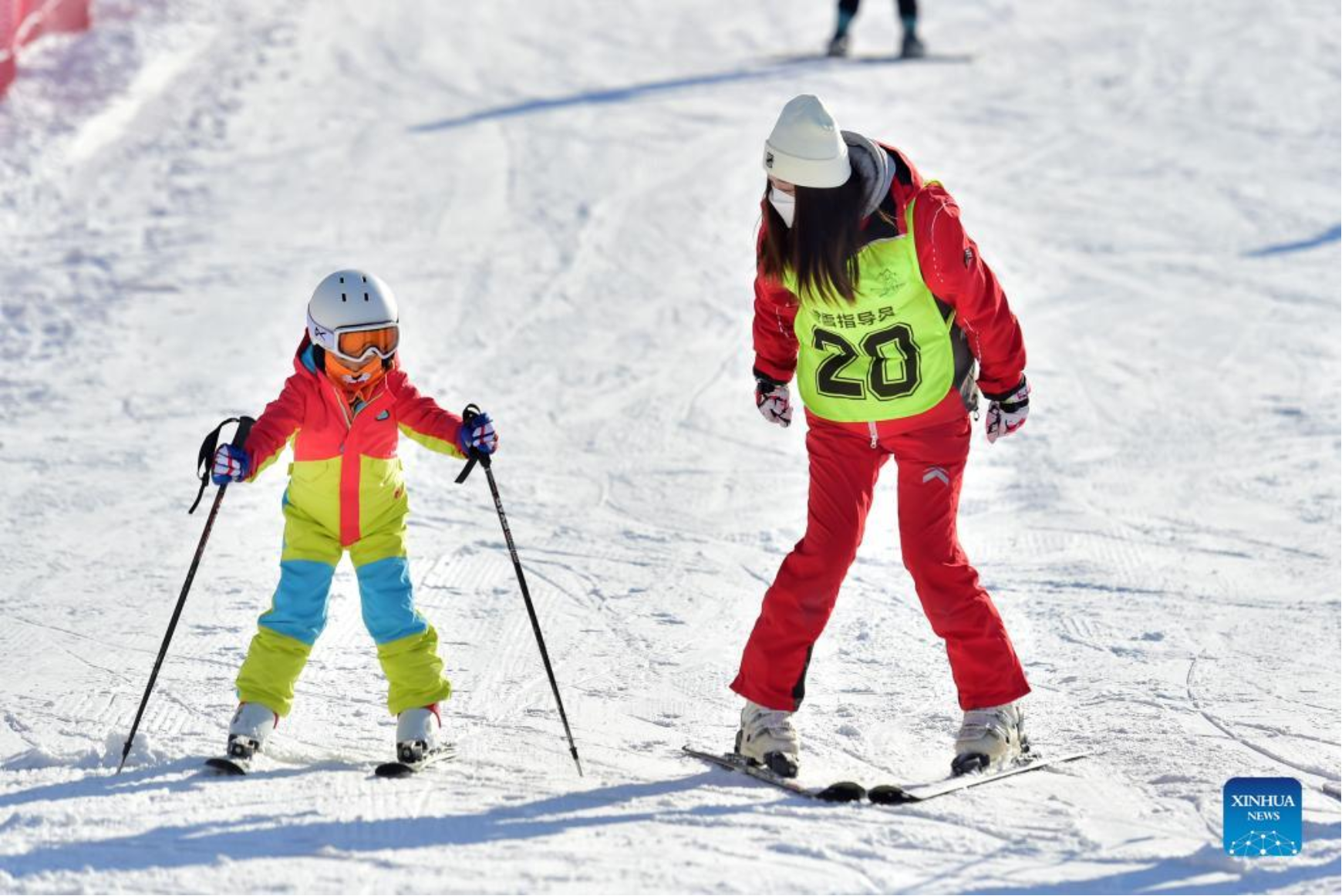 An instructor teaches a child to ski at a ski resort in Shijiazhuang, north China's Hebei Province, December 25, 2021. /Xinhua

From 2015 to 2020, the scale of China's ice and snow industry grew from 270 billion yuan (about $51.5 billion) to 600 billion yuan, according to a report on the development of the sector in China. But the government predicts that China's snow and ice industry will be worth 1 trillion yuan by 2025. They also forecast that the total value of China's sports industry in 2025 will be about 5 trillion yuan. The report also said that the number of skiers in China will approach 55 million in the next three years. Surprisingly, although the north of China has relatively rich ice and snow resources, recently, winter sports have been developing faster in the southern part of the country.

Is it a lot or a little? Let's compare these figures with the global winter sports market. According to the International Snow and Mountain Tourism Report 2020, which provides statistics for the 2018-2019 season, there are just over 2,000 ski resorts globally, and the annual number of ski days worldwide remains relatively stable at around 400 million. Alpine skiing at organized outdoor ski resorts exists in 68 countries. The Alps account for 43 percent of all ski days worldwide. Thus, Europe is the largest Alpine market, accounting for about 210 million ski days per year.

Looking at these numbers, it's easy to see that China will soon become the world's biggest skiing power.

The Winter sports equipment market is known to generate significant volumes of business. In 2022, their worldwide revenue is projected to be $13,743 million. The global market is expected to grow at 4.41 percent annually. One can see that the worldwide winter sports equipment industry is stagnating. So, the market is hoping for its growth, associated exclusively with an increase of well-being of Chinese citizens and the development of the ski market in the most populous country in the world.

The ski market is still currently dominated by foreign brands. Chinese manufacturers are just waking up. But the situation will change very quickly as it often does in China. The government is acting without hesitation. China's General Administration of Sports announced last month that it was "urgent" to promote national standards for the production of ski equipment, such as snow guns, snow groomers and all-terrain snowmobiles, in an industry hitherto dominated by European and American manufacturers.

The above analysis shows that the upcoming Winter Olympic Games in Beijing will be an outstanding event and serve as a powerful impetus for the rapid growth in the popularity of winter sports in the country. As in many other areas, China is becoming a world leader. Just as the government used the 2008 Beijing Summer Olympics to make a decisive leap forward in its overall development, the country intends to use the 2022 Games as a sustainable catalyst to accelerate the growth of sports.

Djoomart Otorbaev is the former Prime Minister of the Kyrgyz Republic, a distinguished professor of the Belt and Road School of Beijing Normal University, and a member of Nizami Ganjavi International Center.