Fast radio bursts (FRBs) are the extremely energetic radio transients with short durations. Their origin is one of the biggest puzzles in the modern astronomy. To identify their counterparts is the most urgent and important task in this field. The recent discovery of an FRB from the galactic magnetar, which is an extremely magnetized neutron star, Soft-Gamma Repeater (SGR) J1935+2154 confirmed the magnetar origin of at least some of FRBs.

Dr. Lin Lin from Department of Astronomy of BNU and her collaborators monitored SGR J1935+2154 with the world’s largest single-aperture radio telescope, Five-hundred-meter Aperture Spherical Radio Telescope (FAST). No radio signal from this magnetar was detected at the time when 29 X-soft gamma ray bursts were released observed with Gamma-ray Burst Monitor onboard Fermi satellite. The FAST observations provide the strictest upper limit of the radio flux for magnetar bursts so far. Their discovery significantly promotes the study of the origin and physical mechanism of FRBs.

The study of Dr. Lin and her collaborators further clarified that the association between FRB and magnetar X-ray burst is rare. They also pointed out several possible reasons: 1) FRBs have strong beaming effect; 2) The spectrum of FRBs is narrow, and most of FRBs radiate outside the FAST working band; 3) The X-ray burst associated with the FRB is very special.

The observation campaign was also utilized by multi-wavelength facilities around the world, including the NASA Fermi satellite, the Chinese Insight-Hard X-ray Modulation Telescope (Insight-HXMT), optical telescope BOOTES, etc. The figure below presents the timeline of the multi-wavelength observations of SGR J1935+2154. 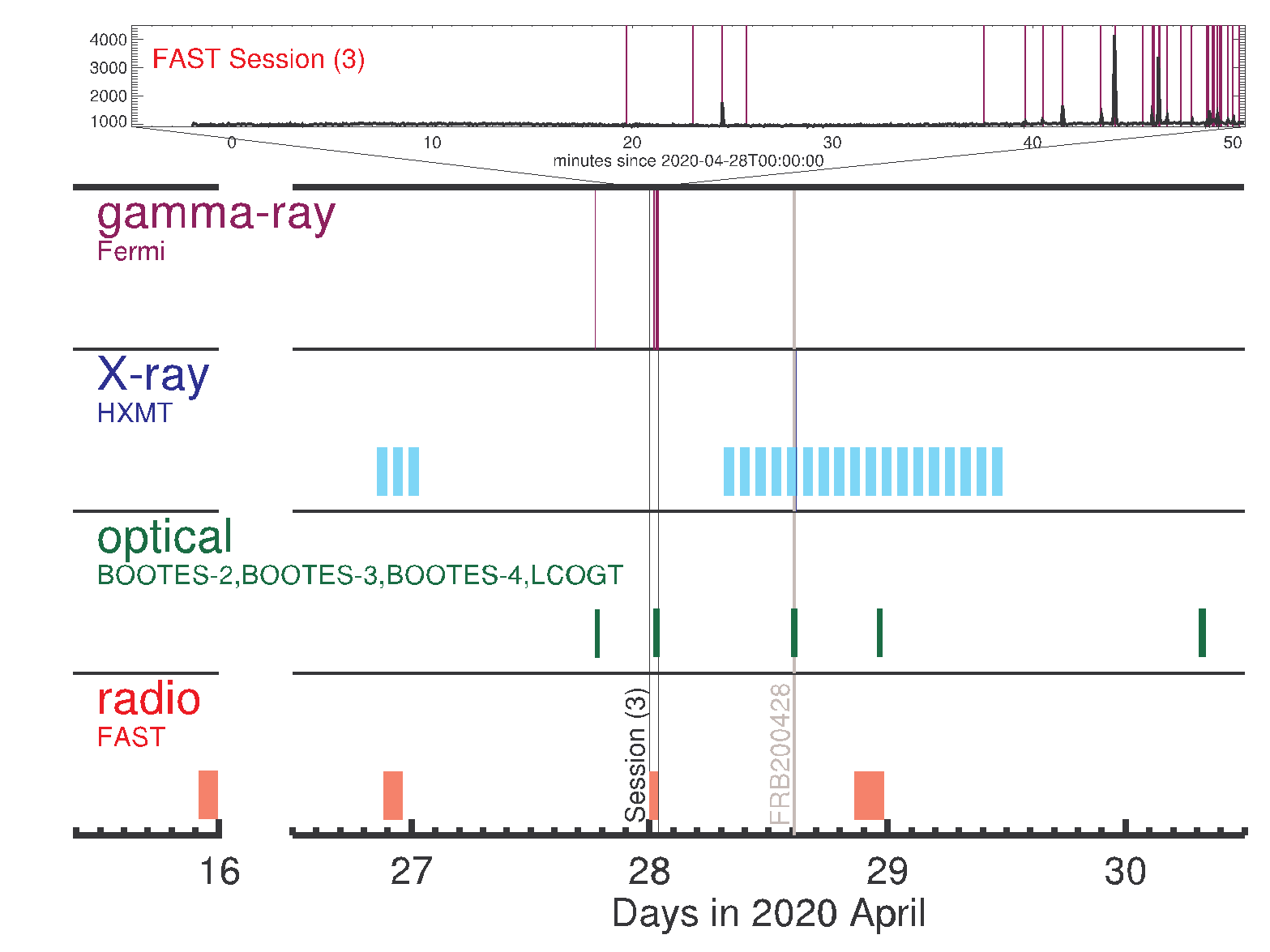 A research article entitled No Pulsed Radio Emission During a Bursting Phase of a Galactic Magnetar published in Nature on November 4 reported the results of this work. Dr. Lin Lin is the first author of this paper. Professors He Gau and Zheng-Xiang Li also from the Department of Astronomy of BNU are co-authors. Other collaborators are mainly from the FAST FRB collaboration and Insight-HXMT team.

This year is the 60th birthday of Department of Astronomy, Beijing Normal University. The Department of Astronomy grow remarkably in recent years under the strong support from the university. We have one innovation research group granted by the National Natural Science Foundation of China starting from this year. Our faculties hold 6 key or major projects under progress. In the past 4 years, 6 important research results have been published in Nature or the sub-journals of Nature (including 3 first author papers).