A signing ceremony for a strategic partnership agreement between leading Chinese and British universities was held in Beijing on Nov 28, celebrating their mutual progress and forging deeper ties.

Witnessed by representatives from the Ministry of Education, the British embassy and the British Council, delegations from Beijing Normal University and Cardiff University in Wales reflected on what they have achieved through joint endeavors, and discussed how to further their cooperation in fields such as humanities, arts, statistics, social sciences and artificial intelligence.

Cardiff University President Colin Riordan says the establishment of the BNU-CU Chinese College in Cardiff is one of the biggest accomplishments to date as it’s an unprecedented attempt to base a joint college by Chinese and British universities in the United Kingdom.

The college, co-initiated by the school of Chinese language and literature of Beijing Normal University and the school of modern languages of Cardiff University in 2015, offers dual degree programs in Chinese studies, allowing students to study for two years in the Welsh capital and two years in Beijing.

Riordan says: “BNU is a good match for us, because it offers the opportunity for us to cooperate in the arts, humanities, education and social sciences. These are the areas where we didn’t have enough cooperation with Chinese universities.” Other fields they would also like to work together cover psychology and neuroscience, he adds.

Dong Qi, president of BNU, says that the collaboration between the two universities will contribute to the development of higher education in both China and the UK.

More departments and schools in BNU, including its branch campus in Zhuhai, Guangdong province, will embrace more collaborative projects with the British faculty.

“We would like to provide students from both universities opportunities to be exposed to cultural diversity, to understand what is behind China’s rapid development and notice the challenges confronting Chinese society,” he says. “I believe these experiences will prove to be beneficial for their growth in the future.” 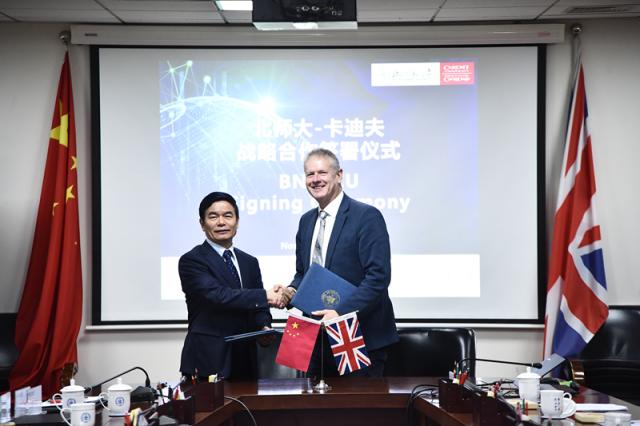